Mining under our water catchment? 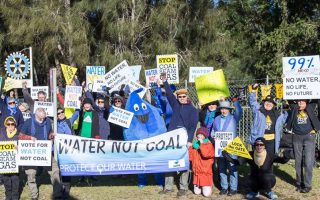 Illawarra Residents for Responsible Mining is a community group that formed in 2011 to oppose the expansion of the Gujarat NRE No. 1 Colliery in Russell Vale (now named Wollongong Coal Ltd’s Russell Vale Colliery) in NSW, Australia.  We advocate for responsibility in mining, mining which puts the health and well-being of ordinary people and of the environment ahead of corporate mining interests.

Wollongong Coal wants to expand coal mining in our drinking water catchment, but the company has a record of financial weakness, technical incapacity and frequent breaches of the conditions of its mining licence.  The company needs approval under the EPBC Act from the Federal government to proceed.  Make a submission by 25 February 2021 urging refusal of the Underground Expansion Project.

Wollongong Coal plans to expand the Russell Vale mine, mining a third seam of coal beneath two previously mined coal seams up to the shores of the Cataract Reservoir in the “protected” Special Areas of Greater Sydney Water Catchment. The area above this mining is unstable, riddled with – and still moving as a result of – previous mining.  And while in recent times coal was trucked out of the Russell Vale Colliery, Wollongong Coal now plans to process the coal on site in the densely populated residential area.

The Minister for the Environment has granted Federal approval to Russell Vale Mine Expansion. There are numerous grounds upon which the Minister could have knocked the project back. The Sharma case established that she has a duty of care to avoid causing harm to Australian children from climate change. It’s hard to understand how the Minister could then appeal that decision and proceed to merrily approve new coal projects. It’s a new low for the Morrison government - forget the kids and govern for the coal barons. ... See MoreSee Less

Share on FacebookShare on TwitterShare on Linked InShare by Email